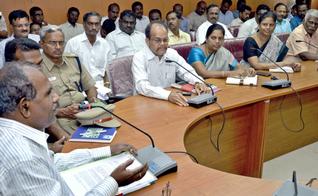 Salem  is a city and a registered Municipal Corporation in Salem district located in the Indian state of Tamil Nadu. Salem is located at a distance of about 160 kilometres (99 mi) northwest of the city of Coimbatore . Salem is demographically the fifth largest city in the state of Tamil Nadu succeded by the capital Chennai, and the famous cities of Coimbatore, Madurai, and Tiruchirappalli in respective order and ranks fourth urbanaization wise in the state. Salem is the headquarters of the Salem District.
The town of Salem was constituted as a municipality 1866,  and then promoted to special-grade during 1965-66 and as a municipal corporation from April 1994. The Salem municipal corporation is divided into 60 wards and there is an elected councillor for each of those wards.  The  area of functions of the municipal corporation are devolved into six departments: Public health, city planning, revenue, information technology(IT), engineering, personnel/general administration.

All these departments are under the control of a Municipal Commissioner who is the executive head of the organ. The legislative powers are vested in a body of 60 members, one member each representing each of the ward.The legislative body is headed by an elected Chairperson assisted by a Deputy Chairperson.Salem is composed of following constituent territories: Salem West, Salem North and Salem South assembly constituencies that were newly after the constituency delimitations 2008.Salem sends three elected members to the Tamil Nadu Legislative Assembly.

Law and order in the city in maintained by the Salem sub division of the Tamil Nadu Police supervised by an official at the designation of Deputy Superintendent. There are about five police stations in the town of Salem, with one of them being an all women police station. Apart from regular policing there are special departments too like prohibition enforcement, social justice, human rights,maintaining district crime records and special branch that operate at the district level police division headed by a Superintendent of Police. Given below is a list of various government offices in Salem:


Working hours of all the government offices are from 9:00 am- 4:00 pm.For any administrative work or enquiry, one can visit the  respective above mentioned offices.