Kothandaramar Temple is located in the town of Ayodhyapattanam which is situated 10 km away from Salem. It is located near the Athur – Vriddachalam to Tiruppattur highway. It is one of the oldest temples in Salem and built during the Tirumala Nayak period 17th Century AD. One of the features which make this temple unique is the fact that the statue of Ram is in sitting posture where his left thigh is placed on the right thigh which is completely different from the other statues of Rama. 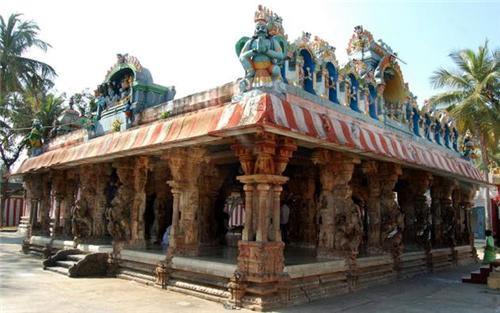 The localities’ tell an interesting story about this temple. It is believed that after the battle with the Ravana, the Lankan king was concluded; Ram and Sita came at this place and stayed here for one day. Vibheeshana requested him to give the darshana in Pattabhisheka Posture. This is the reason due to which the statue of Sita is on the left of the Rama in this temple. The statue of Vibheeshana is standing opposite Rama and Sita. He is offering prayers to both of them and is seen in the posture of invoking the blessings from them. 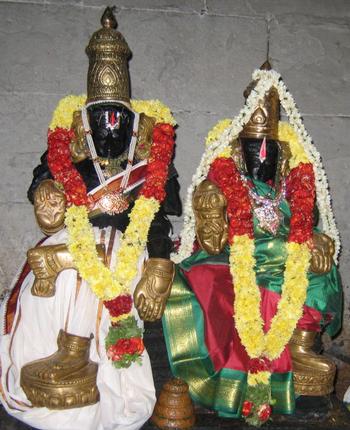 The statues of the brothers of Rama, Lakshmana, Shatrugana and Bharata are also inside the sanctum. There is also a statue of Anjaneya in the sanctum.

The temple of Kothandaramar is situated in the area of one and half acres. It was built in 17th AD century when Tirumala Nayak was ruling the area. The architecture of the temple is very beautiful
The entrance of the temple in eastern direction has Raja Gopuram, which has the height of 150 feet and has 5 tiers. 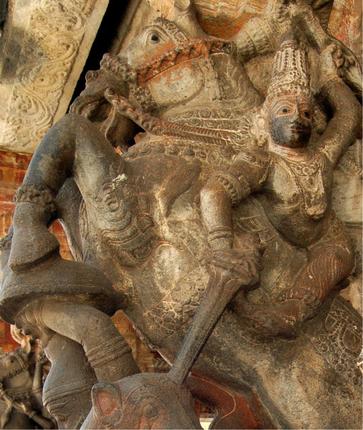 When you enter in the only Prakara in this temple, you can see the spacious Maha Mandapa where you can find pillars which have good workmanship. You can also see various artistic sculptures which are inside the temple. The creation of these sculptures dates back to the Nayak dynasty. When you face the north eastern direction of the Maha Mandapa, you can see three musical pillars and cornices. 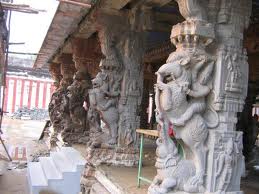 The horse pillars are similar to the Madhura style, which was prevalent during the rule of the Tirumala Nayak. On the Eastern corner of the Mandapa there is a single pillar. You can see and enjoy the Dasavathara carvings on this pillar. On the Maha Mandapa you can see the carvings of the four figures.

These figures represent the Tirumala Nayak himself, his wife and his two sons. On the upper walls of Maha Mandapa you can see various Mooligai Paintings. It is believed that in the past centuries, the temple also had the vahanas of the Anjaneya. They had a horse, an elephant as well as a palanquin. The temple also has a wooden chariot which is 20 feet high and is currently in dilapidated condition.

As it a temple of Rama and Sita, it celebrates Ram Navami for 10 days which celebrates the birth of Lord Rama. This festival is organized during the Chaitra month as per the calender of the Hindus. The day of the birth itself is celebrated in the Shukla Paksha at the Navami, that is the ninth day of the Chaitra Month. Ramnavami is even known as the “Chaitra Masa Suklapaksha Navami”. It marks the last day of the Chaitra Navaratri celebrations in the temple. 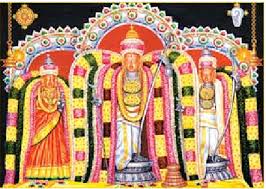 The second festival which is celebrated in this temple is the Hanuman Jayanthi. Hanuman Jayanti is celebrated by the temple priests to commemorate the birth of the Hanuman, the monkey god who was the ardent devotee of Shri Rama. This festival is celebrated on the 15th day after Shukla Paksha in the Chitra Month. The day is also known as the Chaitra Poornima as per the Hindu Calender. In this temple, the date of the Hanuman Jayanti always comes in Margazhi month which is between the 15 December and 14 January every year. People believe that Anjaneya or Hanuman was born on Amavasya or new moon day in Margazhi month at the time of Moola Nakshatra.

You can visit the Ayodhyapaatanam in the time of the festival season which is celebrated in a very grand manner all over the town. Anyhow the months of February, march, October, November and December are popular for the visit by the devotees to the nearby town of Ayodhya for the worship in the temple.

How to Reach Kothandaramar Temple

By Train: There are 2 trains available from Salem to Ayodhyapattanam quite often. The train Chennai Egmore – Salem Express which takes its journey from 5.30 am in the morning is good and safe for the travelers.

By Bus: Bus services are evitable, when most of them opt for the Tirupattur and the Attur buses to reach the temple in around 45 minutes from the Salem bus stand. Some of the travelers prefer to take a cab or an auto to the temple which takes hardly 15 minutes to reach there.